Now you want to get into something controversial, it has to do with those o-rings that sit in side the head gasket to seal the oil passages to the cam camshafts. As long as I can remember (getting shorter as I get older), these o-rings have leaked. It wasn’t a question of “will it leak?” It was more like “how many miles before it does start leaking?”

The factory had a great idea, but the execution was poor in my opinion. The material was supposed to work,  as described in the description of the material properties, but it was short term. Given enough time of heat/cold cycles, the o-ring would take a set, the sealing properties of the head gasket would fail, and being that the oil passage is a high pressure area, eventually the oil would find a way out. This “weeping” on a cold engine, would leave a fresh oil track down the side of the block until the aluminum would heat up and reseal. The worst case I have seen is when the o-ring would fail and oil would shoot out between the block and head.

When I was working at Rockwell International, we had a SEM (scanning electron microscope). I asked one of the techs to do me a favor and look at the o-rings up close. What we found out is that the o-rings were made of Buna N rubber. Buna N rubber under heat and pressure will take a set. In other words it will lose its elasticity. The rubber was broken down in to chunks under high magnification. Ever notice how hard they are when you take them out of a head gasket? It is because they were squashed and baked to the thickness of the head gasket. Sometimes the o-ring even bent in on itself because it had no where to go when it was compressed. This had the effect of closing off some portion of the oil passage.

Wikipedia has this to say about Viton o-rings, “Viton o-rings are the only known solution to the pervasive use of Buna-N seals in many popular BMW automobile engine variable timing units, known as VANOS. In the VANOS, the Buna-N o-ring deteriorate while the Viton fluorocarbon o-rings have similar functional characteristics to Buna-N, but with much higher temperature and chemical resistance characteristics.” This is why most use Viton o-rings in post factory head gasket repairs so to minimize the leaks.

The best thing you can do is to get Viton o-rings. Viton is a Dupont trade name for  Viton is a synthetic rubber compound that is impervious to oil, gasoline and heat. it is what is called a “fluoroelastomers” made with Florine and other compounds. So, what does this mean to you? It means that theoretically you could reuse the o-rings next time you replace the head gasket. I do not recommend that you do. The o-ring will not take a set, it will remain pliable, and it will seal the oil passage.

Now you have a choice, two to be exact. you can get a “square cut” or the traditional “round” o-ring. What matters the most is the vertical thickness and width of the  o-ring itself, and the external dimensions so it fits securely in the hole in the head gasket. If the o-ring is to thick it will compress and expand inward blocking the oil passage.

If you want to get into the engineering side of o-rings, you can read up on the Parker O-ring web site. This is a .pdf file that is very lengthy. Here is what the front page of the manual says, “Since its initial release in 1957, the Parker O-Ring Handbook has become a ﬁxture on the reference shelves of engineers worldwide. This book contains extensive information about the properties of basic sealing elastomers, as well as examples of typical o-ring applications, fundamentals of static and dynamic seal design and o-ring failure modes. It also provides an overview of international sizes and standards, and compatibility data for ﬂuids, gases and solids.”

Here is what Parker says as to why o-rings fail:

Probably the most common cause of O-ring failure is compression set. An effective O-ring seal requires a continuous “seal line” between the sealed surfaces. The establishment of
this “seal line” is a function of gland design and seal crosssection which determines the correct amount of squeeze (compression) on the O-ring to maintain seal integrity without excessive deformation of the seal element.

In general, Compression Set is caused by one or more of the following conditions:
1. Selection of O-ring material with inherently poor compression
set properties.
2. Improper gland design.
3. Excessive temperature developed causing the O-ring to harden
and lose its elastic properties. (High temperatures may be
caused by system ﬂuids, external environmental factors, or
frictional heat build-up.)
4. Volume swell of the O-ring due to system ﬂuid.
5. Excessive squeeze due to over tightening of adjustable glands.
6. Incomplete curing (vulcanization) of O-ring material during
production.
7. Introduction of ﬂuid incompatible with O-ring material. (Parker.com) 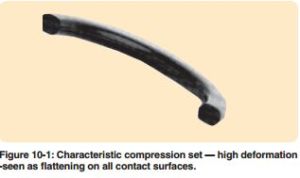 You can continue to use the o-rings that come with the head gasket in the head gasket kits. However, you really don’t know what is being used for the o-ring material. It could most likely be Buna N rubber like the factory. Then you get the same results as before.

There are several “solutions” to this problem depending upon who you buy your head gasket from.

When buying the head gasket ask your parts supplier what 0-rings are being used. Most will tell you they are using Viton and will come in a separate baggie.

Best solution is to buy the correct thickness of o-ring so when it is compressed it doesn’t deform by protruding, doesn’t take a heat or compression set (proper material choice) and will last the life of the engine. Cost? Pennies per o-ring and it doesn’t cut the oil supply to the head.

The dowel pin approach has been around since the 70’s. A dowel pin is inserted into the oil passage, the o-ring is then slipped around the pin after the head gasket is installed. The intent is to force the oil through the dowel pin, isolating the o-ring from the oil, and preventing o-ring deformation cutting off the oil supply to the head. The only problems I see using this approach is oil restriction of the oil passage to a pin being inserted into the path way that is smaller than the factory orifice. Also I have seen the pins slip down into the block! Then how do you get them out? 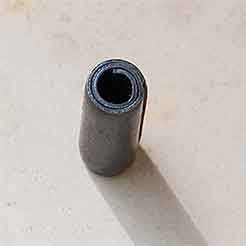 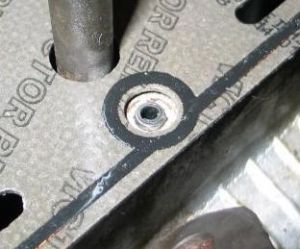 This is a rolled dowel pin, notice how it curves in on itself. Here is a picture of the pin installed in the block. (AlfaBB)

There are two types of dowel pins…rolled and split. Most dowel pins I have seen are the split (down the middle). The other is a “rolled” dowel pin so that it curves around over itself.  Measuring the dowel pin that I have here that is the rolled type, the inside measurement is 2.7 mm. The factory opening in the block is 5 mm. The split dowel pin could be even smaller. By inserting a pin into the oil passage your effectively cutting off about 50% of the oil supply to the cams. Does it work? Yes. Is it a good idea? Yes. Does it cut your oil supply to your cams? Yes. I will leave it up to you to decide if you are going to use the dowel pins or not.

Another solution is to buy a kit that has small metal rings that are custom sized, to slip inside of the o-ring. The head gasket is put on the block, the o-ring is inserted into the head   gasket, and the metal ring is put into the o-ring. The intent here is to keep the o-ring from being compressed to where it deforms to protrude over the oil passage and to retain its shape to seal the head gasket. The trick here is to find the right thickness of o-ring so it meets the criteria of sealing, but not overly thick. Does it work? Yes. Is it a good idea? Yes. Does it cut the supply of oil? No.

Putting sealant on the o-ring? Is it a good idea? Yes, in theory. Does it work? Yes. Does it cut the supply of oil? No. Does it offer more protection over the proper o-ring? Maybe. My opinion is to just insert the proper sized o-ring of the correct material. 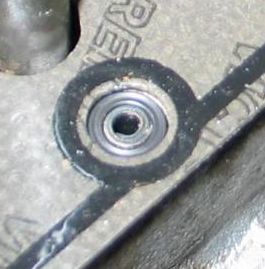 Here is the head gasket in place with the pin and o-ring. Note the black sealant on the head gasket. This melts at temperature when your get your engine hot and forms a seal. If both sides of the block are clean, this will seal properly.

Any questions or comments please post them and I will answer them to the best of my knowledge. These posts are just my opinion and open to comments.

I have been involved in Alfa Romeo cars since 1970 when I bought my 1600 Veloce spider. It was in 1972 that I started the Veloce Register for 1600 cars. It was in 1998 that I added the Sprint Veloce, 750 Spider Veloce and Sprint Speciale registers. Currently I own 2 Alfas: a 1994 164 Quadrifoglio.and a 1991 Spider "Automatic"
View all posts by alfadoc →
This entry was posted in Uncategorized. Bookmark the permalink.