There isn’t a worst feeling than tightening a bolt or nut and have it strip its threads. That happened to me once when working on a 1600 spider, torquing down a head nut, and just as I reach the torque value, the stud spins in the block. It feels like you are putting a bolt into a block of cheese. To repair it requires a complete tear down, custom made stud or welding up, re-boring and a lot of time with money to resolve the issue.

This article is about how much torque to apply to metric bolts and nuts. I will support my article with a couple of charts that you can refer too so you can have them at hand. You can’t go by the adage of “tight is right, tighter is better, but too tight is broken.”

This article comes together with my article “How I learned to twist.” This talks about torquing bolts and nuts. The discussion goes further about how you need a good quality torque wrench for putting engines together. Some mechanics have 3 torque wrenches in their tool box, one for inch pounds, another for torque values in the low to mid range under 80 foot pounds and one for really applying torque up to 250 foot pounds.

There are two types of bolts…standard and Grade 8.8. Each one has a value that goes with it, but the Grade 8.8 refers to the tensile strength of the bolt itself. The metallurgy that goes in to the bolt, makes it stronger and able to with stand greater forces. These bolts are typically put into places where they need to hold things together, like the flywheel to the crankshaft, suspension, steering etc. You can tell it is a grade 8 by looking that the head of the bolt and seeing a “8” or “8.8” in the marking. When you are out buying grade “8.8” bolts buy from a reputable source. Not all bolts are created equal. It might be labeled as a 8.8 grade bolt, but how much are you willing to put your life on the line if you buy from anywhere?

So why torque? “The general objective from a tightening process is to achieve a consistent bolt pre-load.”

“One of the disadvantages of using torque control is that there can be a significant variation in the bolt preload achieved for a given torque value. There are several reasons for this e.g. inaccuracy in applying the torque, dimensional variations of the thread and hole size variation amongst others. However, the dominant factor is usually due to the frictional variation that is present between the contact surfaces that are being rotated. ”

Referencing back to my other article, you will see where I say you should run a tap or die down the hole/stud to clean up any burrs or trash that might be lurking. This affects the contact threads and how the finished torque value is being applied. I said that you should sand smooth any washers so you don’t have Brinelling marks. These marks are caused by over torquing and contaminants between the mating surfaces.  The face of the acorn nuts should be sanded smooth also to make sure the mating surface is clean, and chased with a tap or appropriate die. If the hole has a bottom, use a bottoming tap that is square on the end to get all the way down if your able to. Wash out the hole with cleaner and blow clean. Be sure you cover the hole with a rag so you don’t get blow back into your eyes and face!

“From tests, it is known that approximately 50% of the tightening torque is dissipated in overcoming friction under the bolt head or the nut face (whichever is the face that is rotated). Typically only 10% to 15% of the overall torque is actually used to tighten the bolt, the rest is used to overcome friction in the threads and on the contact face that is being rotated (nut face or bolt head). Relatively small changes in the nut face friction can have a significant effect on the bolt preload. As more torque is perhaps needed to overcome friction, less remains for the bolt extension and hence as the effect of adversely reducing the preload. If the friction under the nut face is reduced, then, for a given torque, the bolt preload will be increased.”

What is said here is that if the sliding surfaces are clean and even, then more torque is given to the bolt.

“Washers are occasionally used as a means of minimizing frictional scatter besides the common reason of reducing the bearing stress on the joint face. The friction condition between the washer and nut face can be reasonably well defined and controlled, more so than the joint surfaces usually can. By controlling the friction, the preload can be more reliably achieved. To do this consistently, a close fit is needed on the inside diameter of the washer. One way in which this can be achieved is by the use of a SEMS unit (in which a washer is held captive on the bolt shank). The same can be achieved by using a KEPS unit (a washer being held captive on a nut).”

Alfa Romeo in their wisdom put washers under the acorn nuts on the head so that the nuts don’t cut into the aluminum. Imagine what the head would look like if the head was taken off a number of times? There would be deep gouges in the aluminum and then how would you be able to get a consistent torque? You wouldn’t!

What you do is sand smooth those washers and the base of the acorn nuts, use a 12 x 1.25 mm die to chase the treads on the studs “before” you put the head on, and a corresponding tap to clean out the insides of the acorn nuts.

Alfa Romeo says to use oil on the nuts and bolts in certain locations. They are saying that you need a smooth consistent torque on these bolts and nuts. The oil helps to make sure that the load is spread evenly.

On another note, the nuts that hold the cam caps down. You might say “tomatoe” and I might say “tomato” kind of a thing here about which side down. There has been variations in the nuts as some will have lettering on them and some won’t. They are grade 8.8 nuts by the way! If you look at one of the nuts there is a rounded side and a flat side to the nut. Put the lettering side up and the flat surface down on the washer.

If in doubt, put the side with the greatest surface contact area against the washer. (see the article on ‘washers”) 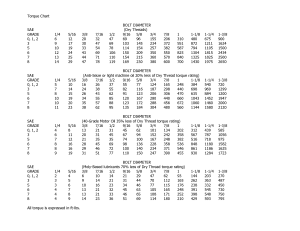 This image is not a metric bolt chart but shows how much of a difference there is in torque values depending up on which lubricant or a dry torque you put on the bolt/nut. 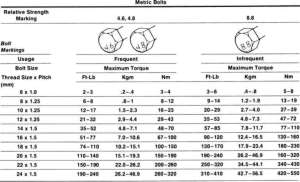 Chart is for coated bolts and compensated torque values

Chart is an expanded chart for metric bolts (1.25 pitch or greater) and torque values

I have been involved in Alfa Romeo cars since 1970 when I bought my 1600 Veloce spider. It was in 1972 that I started the Veloce Register for 1600 cars. It was in 1998 that I added the Sprint Veloce, 750 Spider Veloce and Sprint Speciale registers. Currently I own 2 Alfas: a 1994 164 Quadrifoglio.and a 1991 Spider "Automatic"
View all posts by alfadoc →
This entry was posted in Uncategorized. Bookmark the permalink.
Loading Comments...
%d bloggers like this: